It can be difficult to know whether or not an elderly loved one will get Alzheimer’s disease. The likelihood of Alzheimer’s does increase with age, with about 1 in 14 people over the age of 65 diagnosed, but many people also live on into their 80’s and 90’s with very little decrease in their mental capacities. It’s impossible to definitively diagnose alzheimer’s while the person is alive, since it’s necessary to do an autopsy of the brain to really see the damage. Thus diagnosis is based on the symptoms and only becomes possible with cognitive decline that is severe enough to be noticeable. This makes it challenging to plan a treatment program for progressing dementia.

The Pros of Being Proactive

It’s best to be proactive. Studies have shown that many cases of Alzheimer’s can be prevented, or at least mitigated, with lifestyle changes. These changes aren’t too hard to incorporate into any daily routine. The measures shown to slow the progress of Alzheimer’s are basically synonymous with maintaining a healthy, active life. Exercise is one of the most important aspects of this regime, not only because it maintains overall health, but also because it directly affects the level of connectivity among the neurons in the brain. Any form of exercise can be beneficial, but programs that include dance have been shown to have a more positive effect on cognition.

What Happens to the Brain with Alzheimer’s?

The human brain is made up of about 100 billion nerve cells or neurons. Each neuron can be connected to up to 10,000 other nerve cells via a long filament, called an axon, and a network of smaller tentacles, called dendrites. Chemical and electrical messengers are passed among neurons via this network. The transmission of these chemically encoded signals is what creates human thought and memory.

In Alzheimer’s, abnormal proteins called plaques build up around the neurons and dendrites. These proteins hinder some of the communication that takes place between cells. Over time the cells die or are replaced by more abnormal protein forming a tangled, non-functional mass. Autopsies of patients who have died of severe Alzheimer’s reveal numerous tangles and fluid filled cavities where tissue has decayed, as well as a high degree of plaque built up around the remaining healthy cells.

It’s not known what causes the human brain to degenerate in this way. An abnormal gene has been traced to some cases, but mostly it is found in individuals who develop alzheimer’s at a much younger age, in their 40’s or 50’s. Alzheimer’s that emerges with advanced years is believed to be the result of complex factors, including a number of different genes exacerbated by head injuries and other health issues. The buildup of plaque and tangles can also progress at very different speeds in different people, again supporting the conclusion that it is possible to prevent some forms of Alzheimer’s, or at least slow the process down. 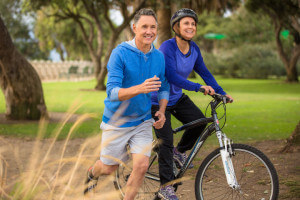 A 2013 report by the Ontario Brain Institute examined the results of 55 studies related to the effect of exercise on alzheimer’s progression. The report found a very real connection in that people over 65 who exercised regularly were 38% less likely to develop symptoms of progressive dementia related to Alzheimer’s. Exercise improves overall health and reduces other factors that contribute to brain degeneration such as diabetes, obesity, and high blood pressure. In addition to this, exercise stimulates the flow of blood and increases glucose levels among brain cells. This supports the normal function of neurons and strengthens the connectivity between cells.

It’s believed that exercise throughout life can build healthier brain cells, while moderate exercise on into old age can slow down and even prevent neuron degeneration. Brain cell stimulation reduces the buildup of plaque even after the changes that take place with Alzheimer’s have already started, so a regular exercise program can be both a form of prevention and a treatment for the disease.

Any form of exercise can be beneficial. An effective exercise program at any age is, by nature, one that is practiced regularly. Choosing a program that you enjoy can be one of the most important factors to think about. A simple form of exercise like walking is easy to fit into any schedule and accomplishes the basic principle of activating the muscles and increasing blood flow to the brain.
However a group exercise program can accomplish several goals at once.

It becomes a social activity, a way of interacting with others and building friendships. This can be very important for anyone battling the isolation and depression that are common with Alzheimer’s. Additionally, a more complex exercise program can include music and fine motor skills, as well as the cardiac effect. This can make the activity a mental as well as a physical stimulation and increase the plasticity of the neurons by forcing them to make connections across several regions of the brain.

How Dancing Effects the Brain

Studies have shown that dance can be one of the most beneficial forms of exercise, both as a means of maintaining neuronal connectivity and a way or preventing depression. A 2008 study in Scientific American noted the double benefit effect that dance has on the brain. Music activates the brain’s pleasure and reward areas to support a more positive mood. Dance, movement that is intentional, specific, and often memorized, provides sensory stimulation to a number of areas in the brain, including the motor and sensory cortices, the cerebellum, and the basal ganglia.

As a therapy for older people, dance has been used most commonly to treat motor coordination problems, such as Parkinson’s disease. However several studies also note it’s beneficial effect with Alzheimer’s symptoms. A 2003 study found that dance improved brain function in dementia patients more than other forms of exercise, such as cycling or golf. Other research has found that dance improves cognitive skills, long term memory, and visual perception.

Anyone at or near the age of 65 should think about establishing a good exercise routine that will help to maintain physical and mental health. This is especially true if there is a history of Alzheimer’s in the family, or for some who has already been diagnosed with the early symptoms of dementia. If you have a parent or an elderly relative who falls into this category, it’s important to encourage them in this direction and take steps to help find a program. A routine that mixes walking with a dance based exercise class several times a week would be ideal. It doesn’t have to be any specific style of dance. Ballet, ballroom, or zumba based classes for the elderly could all be effective. Many water aerobic classes also use music and would be ideal for someone with limited motion.

As people get older, they can sometimes find it difficult to maintain a regular routine. This is especially true of someone in the early stages of dementia. Focus and motivation may be lacking. Transportation can often be an issue for people who live alone. In many cases, family members don’t actually know how much an elderly relative is moving about or getting out of the house.

If this is the case for someone you know, consider finding a personal assistant to help manage their exercise program. Most professional athletes have a trainer to motivate them and ensure they have an effective daily routine. Exercise aimed at Alzheimer prevention is obviously less intense, but no less important considering that health and life depend on it. There are many home care agencies in Fairfax, VA that provide this kind of assistance. Agents can visit one or several times per week. They can provide a simple walking companion, an exercise coach, or transportation to an organized class. Many agents are trained in physical therapy and can help develop a routine to do at home, as well as help to keep track of how many times your relative does it.

Many elderly people are resistant to home care because they feel it makes them dependent. On the contrary, this is a very active step towards Alzheimer’s prevention, especially for someone who has stopped working and lives alone. Managing health becomes more and more difficult with age. No one should think they have to take on this task alone. Professional help can make it much easier.

For extra assistance with caring for a dementia/Alzheimer’s patient, work with Caring Hands Matter. We can help you understand your options and provide insight on how home care visits with a goal of maintaining regular exercise are a great place to start. Professional trainers can design a balanced exercise program tailored to fit the physical and mental needs of someone who is aging. In the meantime, your loved one will get to know the agents and build relationships. This will be a great asset as time progresses since the agents will be able to adjust the program to include medical care and personal assistance as needed.

Beginning home care visits early can prevent the isolation that sometimes happens with elderly people who live alone.It will help keep your relative’s latter years positive and productive. For any additional information on assistance with individuals afflicted with Alzheimer’s or contact Caring Hands Matter online.